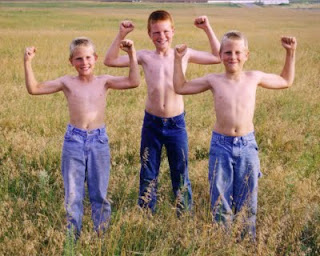 Farmers and ranchers must become activists. We are already environmentalists...but we are too quiet. We work every day to make sure the environment is protected and improved, but we don't usually make time to talk about it. We are too busy doing the actual work of saving the planet!

So I have been on my soapbox lately, but I believe that farmers and ranchers have really blown it by not tooting their own horns! What would have happened if back when "the West was won" the original ranchers didn't pay attention to the quality of the grass and the availability of pure water? The cattle would not have gained weight and the West would have been lost! One big reason that there are people who live in the western half of the United States is that the land was rich and plentiful. Therefore, when farmers and ranchers began to settle here and raise cattle and crops, it was in their best interest to protect the land.

I do admit that mistakes have been made. Land that should not have been farmed has been plowed up and an attempt has been made to farm it. Also, practices that were not the best for conservation of the soil have been used early in the farming days, but today's practices are very much improved, and the aim is preservation of the soil and protection of the land. The same can be said for ranching. There are pastures that have been misused or overgrazed, but in modern times, ranchers work very hard to protect their main source of nutrition for their cattle: grass!

We live in the Flint Hills of Kansas. The Flint Hills is one of only two places in the world with the same grass growing that was here thousands of years ago. The Flint Hills is actually misnamed, in my opinion, as the rocks that are so near the surface are not flint, but chert. It is because of the hills and the rocks that so much of the land in these hills is not tillable. So the grass was left and grazed and the ranchers realized that the grass was a high quality, durable resource that raised fat, healthy cattle. Therefore, this grass is highly sought after for grazing cattle! The grass is a tall grass that when grazed early in the season, can provide adequate nutrition for cattle throughout the summer.

Early in ranching history, the cattlemen of the Flint Hills learned that without proper management the grass populations declined, and the tree population increased. The trees can be reduced by various methods--chemicals, physically removing them, or burning the grass while it is dead. The early Indians saw the natural fires in the prairie and realized that when the old dead grass is removed with fire, the number of trees declines, the number of weeds declines, the amount of fresh grass increases, the number of different grasses increases and the buffalo get fat! The ranchers still today employ the controlled burn for the same reasons.

Spring time in the Flint Hills is burn time and that means that often in the towns a cloud of smoke may hover over a shopping mall for a day or two, black ash may be carried in the wind to drop on a parking lot, and from time to time a dense cloud of smoke may cross a road obscuring visibility. Ranchers planning their burns do worry about these things and do their best to decrease this happening, but from time to time it does still occur. I still believe that burning is better than the other methods of control...chemicals can be used to kill undesirable weeds and trees and tractors can be run for many hours to mow or chop the old grass. But both of those methods have their drawbacks as well.

So for about two weeks in April, when the bluestem grass is between 1 and 2 inches tall, the weather is calm and dry and a light wind is blowing, the hillsides of the Flint Hills can be seen burning throughout the day and into the night. It is a beautiful sight, made more beautiful by the knowledge that it is done for the good of the land.

Depending on the weather, within hours after a burn, the grass begins to sprout again, creating a carpet of green to protect the land and prepare for the hundreds of thousands of cattle that will graze the Flint Hills each year. Cattle are brought in from across the country to grow until they are large enough to go to a feedlot for finishing, or cows and calves are put to grass to harvest the nutrition of the grass all summer.

I love the Flint Hills--and I work to protect them every single day! I am an environmentalist, and I need to become an activist. Without ranchers like me taking care of this land, the Flint Hills would be a sea of concrete--filled with parking lots and high rise buildings. The land is fragile, but it is improved through the ownership of ranchers and the use by cattle.