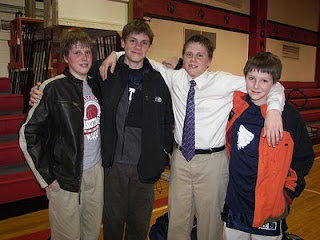 Dictionary.com defines "jargon" as the language, esp. the vocabulary, peculiar to a particular trade, profession, or group....but the 3rd definition is: language that is characterized by uncommon or pretentious vocabulary and convoluted syntax and is often vague in meaning.

Every profession has its own jargon or terms that are not widely used in other professions, and the ranching industry is no different.  I try to be careful to not use complicated jargon or "pretentious vocabulary" when talking to people who are not ranchers. I believe that using unfamiliar terminology is a great way to build walls between people. With this blog, and my other efforts to open my cattle ranch to the outside world, I strive to tear down walls and divisions between groups. Ultimately, we are all the same--we just have different jobs!

I am a mother and a wife--I try to do what is right for my family and my community. I do my best at my job and take pride in my ability to do it well.  I just put on work boots, when another woman may wear black pumps! I am as interested in food safety and quality as the next mom--and that is why I've started this blog. In a previous post "Just Doing My Best" I talk about the similarities between a ranch mom and other moms. We are all just trying to do our best to raise our families. The photo above is of my 8th graders with their cousins immediately after a school basketball game. My boys are the left and 3rd from left and their cousins attend school in a small town 30 miles from us. The schools played each other and it was fun cheering for them during a competitive game. See, we are similar! (pssst...the cousins' team won this time, by the way!)

Each job has its own vocabulary, as I said before. I want you to be comfortable talking or reading about ranching. So in order to assist people who don't work in the cattle industry to understand some jargon we use, I thought I'd spend a few minutes defining a few terms.  Some of them are easy, but some are more difficult to define. I think the easiest way to do that is to just list them.

Those are just a few of the terms that I use on a nearly daily basis. Later I will take some time to define more terms as the year progresses and we start doing other things on the farm. One other important term right now is "Chores."  Many families define chores in terms of what household assignments a child may have, for example taking out the trash, cleaning the bathroom or feeding their fish.  We define chores as feeding, treating and caring for our cattle daily.  We have once a day chores right now, but they last nearly all day! In the winter, the cows have no grass to eat in the pastures, as it is either covered by snow or is of a very low quality. So we feed hay that we have harvested all summer. It takes a lot of hay to feed a cow for the winter! We feed different quality hay at different times of the season.  We test our hay for quality at a lab to determine the nutritional content so that we can make good feeding decisions.  Chores may also be treating cattle for sickness or caring for newborn calves.

Basically "chores" to ranchers is doing whatever it takes to get the job done! Stay tuned for more definitions in the future!