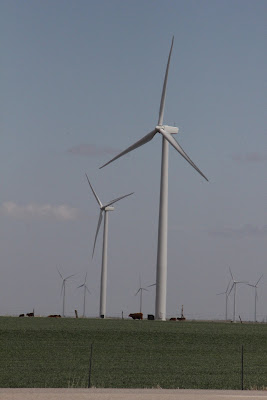 Wind power is a clean natural resource but is it good for Kansas? These wind towers are actually a very controversial topic in conversation with cattle ranchers in the Flint Hills of Kansas. If your ground is situated in an area that receives the optimum amount of wind and has main transport electrical lines running near or through it, you may be a candidate for wind towers. But the Kansas legislature has placed a moratorium on these in the Flint Hills.

I have to be honest, I am not really sure my feelings about having these huge towers situated along the tops of hills in the beautiful Flint Hills of Kansas. I love the unobstructed views that we have of the sunsets over the prairie and I can almost imagine what it must have looked like when the homesteaders traveled in their covered wagons across the hills of our pasture to select their own homesite. The wind towers certainly do not add to the beauty of the landscape. But the real question is...do they detract?

That is not a question I can answer--there are people on both sides of this issue and mostly for aesthetic reasons. There are a few conservation issues that have been brought up, but I think with the recent discussion of the safety of nuclear power (in light of the earthquake and subsequent tsunami in Japan) I think we need to utilize every form of safe, clean power that we have available. 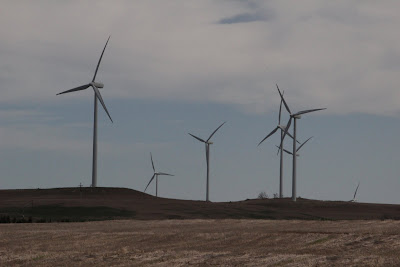 These towers are situated in the middle of the prairie along Interstate-70 through Kansas. They are just west of the Flint Hills near Ellsworth, Kansas. They are at a location that has historically received wind gusts on even a calm day! As I drove through them today, I had to stop and snap a few photos as I truly do like how they look on the prairie. You may not be able to tell but the black dots below them in the top photo are cattle! These towers are huge!!

The controversy comes from ranchers looking to earn some extra money by allowing wind power companies to erect these towers on their land. They usually pay money for some kind of lease and there is an annual payment to the owner of the land.  These farmers and ranchers are able to make some extra money with no extra work! Why is that wrong?

On the other side of the issue is people who say that the wind towers spoil the "viewscape" and they alter the wind flow patterns and scare away wildlife. I have read studies that show no affect on the local environment and others that show a negative effect. The only thing you can't argue with is when someone says they are ugly. Beauty is in the eye of the beholder. 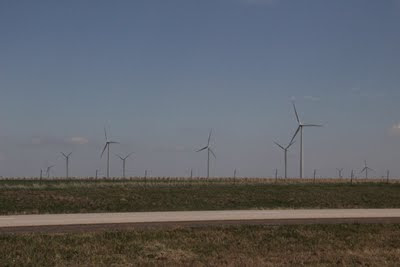 Realistically, it is not a problem I need to, or can, solve. My land is not in an area where wind towers will be placed. But my question is, who am I to say that my neighbor can't have them on his land? I'd really rather put laws in place that say only pretty houses with garages behind the house can be built. But that is not a realistic law...even though I think that is important to the looks of the house! I don't believe the legislature has any right to say what I can and can't do aesthetically to my property! I pay taxes (a lot of property taxes) on this land. I believe that I have the right to build an ugly house, or a bunch of wind towers if I want to!

And, frankly...I don't think these are any uglier than the power lines, telephone lines, interstate system and metropolitan areas that crisscross our country! All in all, it is not a question we will answer here. But I thought you'd be interested in the discussions behind the scenes when wind towers are erected on the prairie.