A bit of relaxation, while storms rage to the east 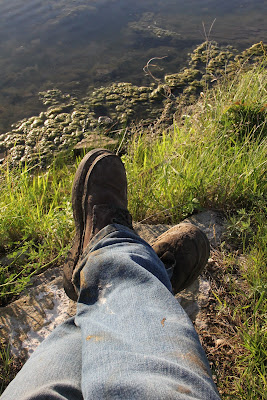 Finally, after a busy week breeding cows and heifers and breathing dust, then slogging through 6 inches of mud, we took a couple of hours to relax at a farm pond and drown a few worms. I chose to just sit at the side of the pond and stretch my legs out!

The spring is a wild and crazy time (that phrase is stuck in my head from years ago when Steve Martin uttered it on Saturday Night Time--I can even still hear the strange accent he used!) for ranchers. We work hard during the entire daylight hours to get the pastures ready for cattle--that means fixing or building fences, putting out mineral feeders and of course, burning pastures in Kansas. Then we spend days (sometimes weeks) sorting through cattle to pair up mamas with their babies to haul them to the correct pasture. I don't want to put a bull in a pasture to breed his mama or a sister, so I have to keep detailed notes on who is related to who and make sure they are organized in such a way that a bull can go to a pasture with no close relatives.

All this organization, as well as the physical work of sorting and loading cattle, can wear me out! So even though we're only just over halfway done, it is nice to relax for a bit. 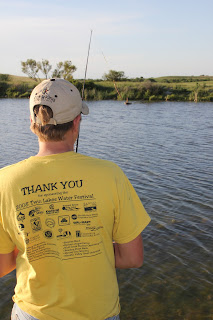 My son enjoys fishing, but the "big ones" were caught by a GIRL this time...a friend of ours spent a week with us working on the ranch. She caught 3 fish....Eric....None! Actually we hadn't expected to catch any since we've had pretty cool weather and lots of rain. So any fish caught were fun! 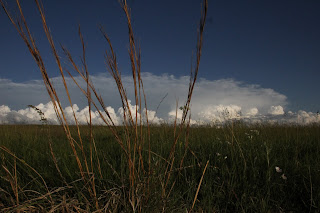 While fishing, we were enjoying the amazing cloud display to the east. The skies were deep blue above us and no rain, but we knew the cloud formations we were seeing meant a rough storm to the east. Turned out, that was the storm that spawned the tornado in Reading, Ks. A small town of only 200 residents was nearly wiped off the map, but only one death. Not as bad, or widespread, as the tornado of Joplin, Missouri just a day later, but try telling that to the residents of Reading! 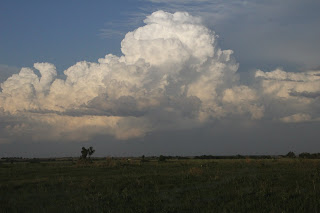 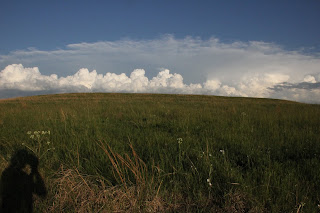