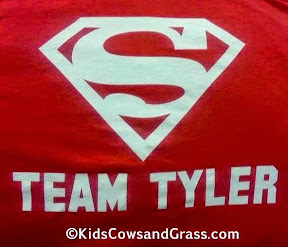 "It's not an 'S,' on my planet it is the symbol of Hope," says the Superman character on the recent movie Man of Steel, in response to Lois Lane's question why he has an "S" on his chest.

My son Tyler has been through a whirlwind of health care chaos in the last few weeks. On August 8, he was diagnosed with Primary Sclerosing Cholangitis (PSC) and we were told the only cure is a liver transplant. My son is 18 years old and headed to college, but he was forced to take a hiatus to take care of his health. He had no choice.

Last week only 15 days after being diagnosed, Tyler was very, very sick. He was readmitted to the hospital and moved to the top of the transplant list as his blood lab results showed how sick he really was. Only 20 days after he was diagnosed with PSC, he got The Call and he received a new liver that night. So his second birthday is August 28, 2014!
﻿ Tyler is an amazing kid, but he is not Superman. My mom and sister made Team Tyler shirts to show him we are supporting him unconditionally. We wore them into his room the evening before surgery and took a group photo wearing red shirts with a Superman logo and "Team Tyler" on the front! On the back, it has the website to register on the National Organ Donor Registry. Interestingly enough, we had just watched the movie Man of Steel and learned of the meaning of the logo in that movie. It is perfect for Tyler.

The new liver is his hope. He is a strong young man, but because of the generosity of a family going through an unthinkable misery, Tyler has hope for the future. He will be able to return to college in January and even move into the Delta Upsilon house! Because of the skills and confidence of his surgeons, hepatologists and nurses, he has the hope to continue to live a full and normal life! And because of the support of the literally thousands of friends and family across the nation, he knows that he will be accepted because who he is, not because of a liver transplant.  Thank you all for using your abilities to support Tyler and give him HOPE! You are the true Supermen!

﻿
Today, just a few days after his liver transplant, Tyler is working hard to eat, walk and function normally again. But he has hope and confidence that one day soon he will be a normal kid, ready to get back to school and meet people as "Tyler"--just Tyler!

You know, most people with PSC have to suffer with the symptoms for years. Tyler really had a number of weeks with severe symptoms. Most people don't even get as sick as Tyler, though. He has only had a short time to wrap his head around this whole thing, but I know with the support of family and friends he will be fine. We give thanks for the generous donor family who wanted Tyler to live. They graciously gave my son a second chance at life. They gave him just what he needed at a time that he most needed help. They gave him HOPE.

Please consider registering to be an organ donor. Go to www.organdonor.gov and talk to your family so they understand your wishes. Make sure they understand that you want to share life with another person like Tyler!