"Nothing is certain, except death & taxes"

"In this world nothing can be said to be certain, except death and taxes," according to Benjamin Franklin. Well, don't get me started on the taxes part--today I attended a funeral of a neighbor who was a 96-year old farmer we all called "Scotchy." He and his wife (who is still living) celebrated their 70th wedding anniversary earlier this year. He lived about 7 miles away and purchased bulls from me.  He told the best stories about competing on a town baseball team, farming through the years and raising a family in the prairies of Kansas.

As I sat in the little limestone church, waiting for the funeral to begin, I watched my neighbors, friends and family file slowly into the pews. At a small town funeral, you don't sit quietly, as most of the people coming through the doors are your friends and neighbors. They are the same people who I see at the gas station and the cafe, and they are the same people who root for my sons on the football field and my daughter on the volleyball court. I often carpool to away games with them, or call at night to coordinate schedules for making sack lunches for the boys on the game bus. So as they each make their way to their seat, we often exchange a greeting or story or a smile.

I won't claim to know EVERYONE in or near my small town, but with a population of only around 500 in the actual town (not including the rural population within a 10 mile radius) it is pretty likely that I am either acquainted with them or related to them! So when a neighbor or fellow farmer/rancher dies, we all stop what we are working on that day and get cleaned up and head to the funeral. 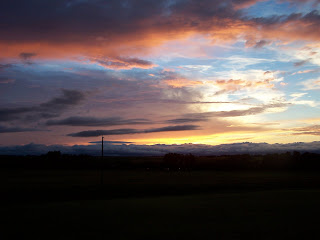 Many people never have the opportunity to attend a funeral until it is a family member. I think that is sad. It speaks to the inter-generational disconnect our society has created. In a small town, your neighbors may be a newly married couple fresh out of college or an elderly widow who happens to be your mother-in-law. Your neighbors may be engineers and bankers, or farmers and ranchers. More importantly, you really know your neighbors. Children are not sheltered from death in a small town, when they have the opportunity to really know the elderly people down the road and I believe they are better off for it. Death is a part of life! No one is getting off this Earth alive, and ignoring it or keeping kids from seeing it, will not help.

A few years ago, my son gave the 96 year old man a ride on the 4-wheeler to his truck. When I told him yesterday that "Scotchy" had died and that I was going to the funeral, he said, "oh that is sad; he was a great guy!" What a healthy response to the news! My boy recognized that Scotchy's passing is sad for the family and friends, but that he had a very long, happy life and he had shared many stories with us. We will miss Scotchy, but his stories will live on.

Tomorrow, I  will be attending the high school homecoming football game. Many of the people I saw at the church mourning Scotchy will be in the stands and along the sidelines at the game cheering on our boys. I'll see them again at the slow-pitch softball tourney all weekend, at church on Sunday and in the halls at school on Monday. They are my neighbors, my friends and my family.