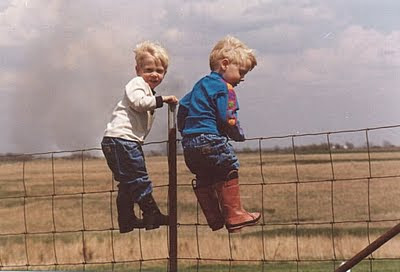 Children are refreshingly honest—unless you’re the mother. Then, I’m sure there are times that you wish they’d tell a little white lie every now and again.
One day, while fixing supper in the kitchen, I hear a small crash (we prioritize the crashes at our house:  small, slight, large and huge) in the living room and the voice of one of the twins starting to cry. Within seconds, footsteps are heard heading toward the kitchen and one of the twins rounds the corner hollering “Push” through huge tears and a very red face. I immediately pick him up and hold him close as the second boy comes into the kitchen a bit slower, but crying nearly as hard.
I hold them both and once they calm down, I ask what happened. Since they are only two years old and not very adept at talking yet, they are unable to clearly explain the circumstances, but I get the main point—that one pushed the other.
Hoping to clear up the mess, I call an older sibling into the kitchen and ask if they saw what happened. She explains that the “boy in red” grabbed the toy from the “boy in green” and the boy in green pushed the other down. I look at the boys on my lap and realize that the boy I had taken to be the pushee, is really the pusher…he had run into the room telling on himself! “Push, push”…means “I pushed him!”
Honesty. When do kids lose it, though? Somewhere after age two, they seem to find that often that honesty can get them into trouble and they start inventing stories to answer the Number One Dumbest Question that a parent can ask, “Alright, what happened here?”
Answers range from, “I didn’t do it” to “I saw him…he did it”—even though “he” has just awakened from his nap and was nowhere near the scene of the incident. And we have somehow gained a kid in our family. His name is “Notme”…I have not officially met this child, but he is in my house quite frequently and leaves a trail of havoc. When I do find this kid, I’m sending him back to his own house as he is only involved in destruction around here. Clearly his parents need to use more discipline. I know MY kids would never pull stunts like what he’s done!