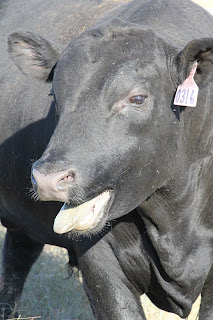 Males of any species are interesting creatures....(don't worry, I'll avoid human references since I am now the only female in a house with four male human creatures.)  There are many traits that I measure in my selection process for the bulls I plan to sell:  muscling, structure, fertility, carcass value and disposition are just a few.  Disposition is easily measured and very important since most of the time I am walking through and sorting the bulls by myself. When a rancher comes to see the bulls and select one for his herd from the 50 or so in my sale pen, we walk among them, sorting them into groups so they can be evaluated from every angle. If my bulls are not easy-going and unafraid, I will not keep them as a bull. They will be steered and sent to the feedyard. 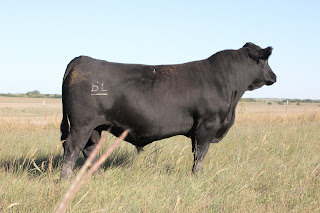 Disposition is inherited, as well as learned. From calving season on, I spend time walking through my cows and calves and it is especially important when they are weaned to get them used to humans so they are not afraid of us. Despite all the time and effort we put into making sure our bulls are calm and used to people, you can never trust a bull. They may not be afraid of me, or actually aggressive toward me, but they outweigh me many many times! 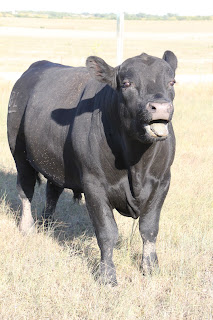 While I walked through the group of 20 bulls to take some pictures, they began to "beller" an "bawl" as only a bull does....a deep long call that sounds to me like they are saying, "I'm a buuuuuuullll, I'm a buuuuuuulllll!" I guess they need to make sure everyone knows that! They stick their tongue out, roll their eyes and put their ears back as they bawl..."I'm a buuuuuulllll!" 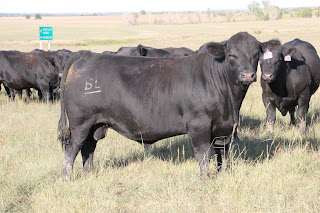 I am not afraid, but I also do not get too far from the truck. It has been years since a bull has come after me, but I do not give them the opportunity. I don't think they really feel that I am a threat, but they are just making sure I know they are bulls and would rather be with a herd of cows than a group of bulls. These are the 20 bulls that I used on my cows this spring and summer. After 60 days or so, I take the bulls away from the cows--I do NOT want calves coming year round. We calve for about 60 to 75 days in the spring. So the bulls just hang around each other the rest of the year, swapping stories, wrestling, eating and sleeping. (Hmmmmm...too bad I promised not to talk about human males....)

These bulls are now for sale. I think they'd rather be hanging out with someone else's cows instead of a group of teenaged males for the winter.