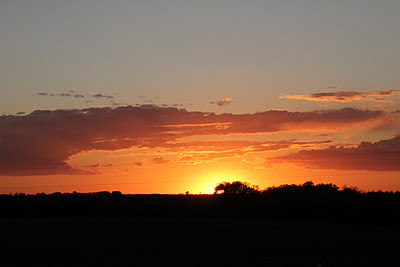 Last week I received the dreaded phone call from the sheriff's office--no my kids were all at home and within my sight. So I knew they were fine, but in the fall and spring cattle seem to think that there is better grass on the other side of the fence and they are often seen on the roads. So when the voice identified herself as from the sheriff's office, I unconsciously sucked in my breath.

We work hard to maintain fences and make sure the cattle have plenty to eat, but at this time of year the quality of the grass is dropping, so cows have to eat an awful lot of it to satisfy their hunger. It doesn't matter how hard you work, it seems that every rancher deals with errant cows or calves.

So when the sheriff's dispatcher said that we had a calf hit by a truck on the road, my stomach dropped to my toes. She said it was badly hurt and couldn't get up. They needed me to be there to identify it so they could put it down. I was still dressed in my "going to town" clothes, but I immediately hollered for my oldest son to come and we headed to the pickup truck. As we drove the 5 miles to the location they had given me, I rolled the information over and over in my mind. I couldn't think of any way we had cattle out on the road. The closest calves to that location were a half mile away, through an empty pasture. I called a neighbor and told him the description that I had received, and he didn't think it was his either.  So I wasn't sure what I would find when I arrived. I had hope that it wasn't my calf, but there was also dread of seeing an injured animal and having to take care of the situation.

When we arrived, the 600 pound calf was lying in the ditch on the side of the road, the man who had hit her with his pickup was there. Luckily he was fine, but his truck was damaged. The sheriff's deputy (who is a neighbor and friend) stood by his car with his lights flashing and held his gun. I made my way to the calf, wary that she might be afraid and bolt away, injuring anyone near her. But she was pretty oblivious to everything at this time, and was unable to move. I did see that she was breathing, but not moving her eyes or ears to any stimulus. I picked up her head, turning it to see the ear tag that identified her as one of my 7 month old heifer calves. I told the deputy that she was mine and to please put her out of her misery right away.

As I moved away from her, I admit that I got tears in my eyes. I covered my ears to muffle the sound of the gunshot that would end her misery. Every rancher is familiar with humane euthanasia, but it is never easy to perform. I apologized to the deputy and told him I appreciated him taking care of it for me. My heart broke as we moved her body from the road to the pasture so we could bury her. We were planning to wean that pasture of calves in two days. She would have been safe at home in the pen by the weekend, but instead we were planning how to bury her in the pasture.

As my son and I drove home, we talked about why she was a half mile from the rest of the cowherd. A calf that is not weaned does not willingly separate itself from the herd--even if its mama has started weaning it. Cattle are herd animals and do not like to be alone. They will not willingly leave a herd to venture out alone. I do not understand what made her leave her mama.

On Saturday, when we gathered up the rest of the herd, we found the remains of her mama cow. She was dead and had been for a few days, but she looked as though something had killed her. There have been recent sightings of cougars near that pasture, and her body was in the trees--perfect for a cougar looking for prey. We wonder if a cougar killed the cow and chased off the calf, or if the calf ran out of fear after her mama was killed. All we know is that something scared the calf enough to run from the herd, and her mama is dead in the pasture.  We will never know what happened that night, but it really hurts to know that I lost a cow and calf who were entrusted to me for their care. I take my job very seriously and I feel this loss as a failure of my own.

I don't know if I could have saved either of them, but it hurts to lose a cow and calf. We now carry a gun when we go to the pastures. If there are cougars around, it is not smart to be unprepared. I don't think they'd attack a person, but I don't really know for certain. It is illegal to shoot a cougar, unless it is attacking a person or one of your animals. I just want my boys to be prepared.