Do ranchers care about animal welfare?

Guest post by Paige Pratt, a friend of mine from my hometown and lifetime family rancher in Kansas. I recently saw Paige and she said she had attended a meeting that Wayne Pacelle of the Humane Society of the US was one of the main speakers! Mr. Pacelle is often considered an enemy of animal agriculture and many people are afraid to confront him in person...but not Paige! She even asked a question during the Q&A and clearly showed him that as a farmer and rancher, she is involved in animal welfare every single day.  Below are her thoughts from the meeting...

Earlier this week I went to the Bob Dole Institute for Politics and attended a session entitled Animal Welfare in America.  The speakers were Wayne Pacelle, President of the Humane Society of the United States (HSUS) and Nancy Perry, Senior VP of Government Relations, ASPCA.  The topics of the evening ranged from puppy mills to horse slaughter to food animal production.

Being a farmer and rancher, I was very intrigued by the discussion regarding food animal production, especially when Mr. Pacelle indicated one of their top priorities is to shut down all intensive confinement operations.

For the most part, this would include hogs and chickens, so as a cattle rancher most folks would assume I don’t have a “dog in the fight.”  This couldn’t be farther from the truth!  I recently lived in Virginia, one of their top agriculture enterprises is poultry and turkey production, and I have many friends that are involved in the hog and poultry industries.

I have walked into a barn with 35,000 pullets (chickens that are used for meat purposes) and I can tell you that the barn was clean, and the animals were clean, healthy and well-cared for by the family who owned the farm.  As we toured the operation, you could see the pride of the farmer; his animals were comfortable and healthy.  When we walked into the barn the pullets came over to you, let you pick them up and showed no fear.

Groups like HSUS, ASPCA and PETA want the rest of the world to believe that “factory farming” has nothing to do with a family farm and it does!  On this particular farm, as is the case for most hog and poultry growing operations, the company owns the animals, but the family takes care of them and owns the facility in which the animals are raised.  So, when these interest groups want to make changes to the way these animals are raised, they are targeting the family farmer and his/her profitability, not the company who owns the animals.

"I believe in the humane treatment of animals, as do all producers I have ever known."    --Paige Pratt, farmer and rancher in Kansas

We care for animals in the snow, wind and rain; we get up in the middle of the night, for many days in a row, to make sure they are born safely and are cared for by their mothers and we always make them a priority. As farmers, we have the challenge of feeding the world; we take it personally as we strive to keep the world fed every day with the safest and most nutritious food in the world. In order for us to continue our legacies and pass family farms from one generation to the next we must be profitable and in order for us to be profitable, we must care for our animals. 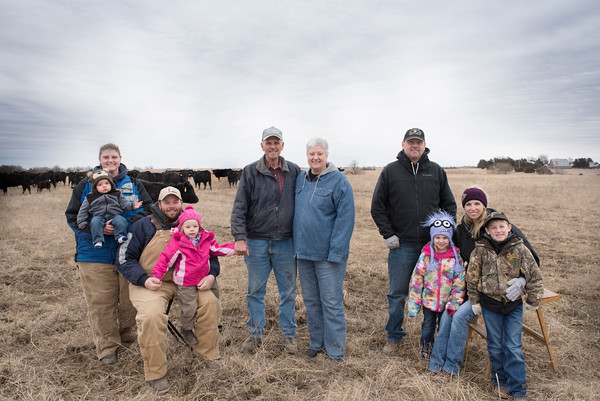 The Humane Society of the US is NOT the national umbrella organization for your local animal shelter or humane society! They are an activist group who uses the money they raise to lobby and to fund their own retirement accounts.  If you are interested in supporting animals, donate to your local shelter.  And for more information about HSUS, go to HumaneWatch.org.